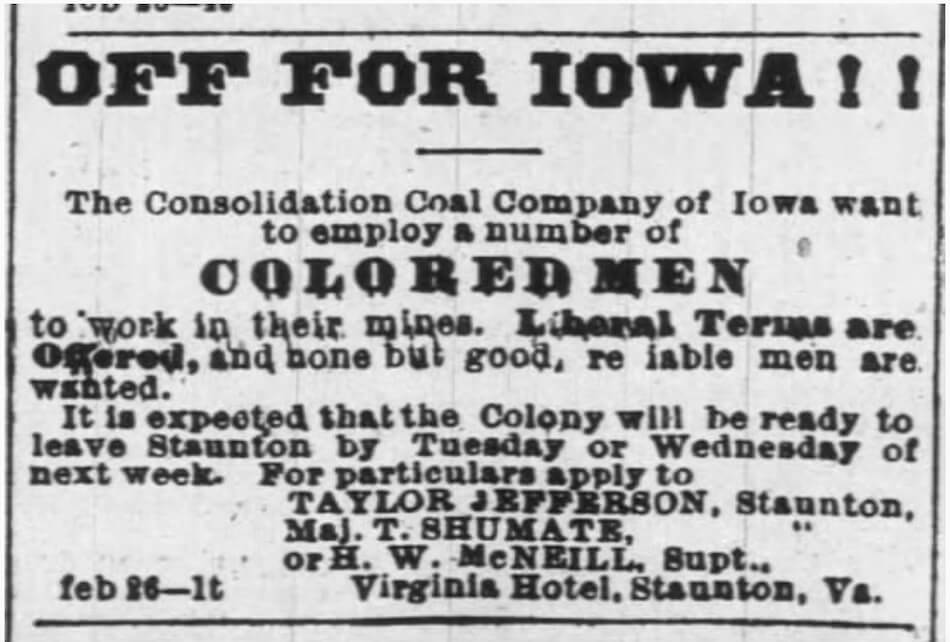 While researching how African Americans ended up being 55% of the population in Buxton, Iowa—which was established by Consolidation Coal Company—I did not expect to discover that one of the men who’d recruited African Americans to work in the company’s mines was Major Thomas Shumate, a Confederate officer.

Within five to six years of establishing the Consolidation Coal Company, in 1879, the McNeill Brothers—H.W. and W.A. McNeill—were once again confronted with striking miners in Muchakinock (Buxton’s predecessor). For the second time, the miners were demanding higher pay. H.W. McNeill had been considering the hiring of African American miners and this may have been the final straw.

Which is where Shumate enters the story.

The following excerpt from CREATING THE BLACK UTOPIA OF BUXTON, IOWA has been edited to include only the information applicable to Shumate.

On February 26, 1880, the Valley Virginian of Staunton reported that [H.W.] McNeill had “discharged” the disgruntled miners and was in Staunton, Virginia, recruiting African Americans to take their places.

McNeill did not travel to Virginia alone. Hobe Armstrong, a successful
African American businessman who lived in Muchakinock … accompanied McNeill. Around the time of the trip—or possibly while in Staunton—McNeill contracted Major Thomas Shumate, a former Confederate officer, to assist with recruiting, as well.

It is unclear how McNeill met Shumate or how Shumate became involved in recruiting. Shumate was a Virginia native who had served in the Confederate army under General John D. Imboden for the duration of the Civil War. After the war, he became a railroad contractor and a builder.[i] The Valley Virginian deemed him “an excellent manager of colored hands. He has worked them for years, and knows their disposition, needs, and requirements. One of the best evidences that he treats them kindly is that those who have once been under his control, are always anxious to secure work with him again.”[ii]

Shumate’s Confederate background, coupled with the statement above, brings to the forefront African Americans’ role in the railroad during his time. As with the coal industry, enslaved African Americans worked on railroad construction. Nearly all railroad construction (more than 8,780 miles of track) in the antebellum South was performed by slave labor—some were hired from individual slaveholders, others were enslaved by the railroads themselves. The use of slaves was so prevalent that company financial statements showed “Negro Fund” lines to denote the amount spent on human “property.” According to Dr. Theodore Kornweibel Jr., an African American history professor and author, in the Confederate states, 85 of the 113 railroads used enslaved labor.[iii] Shortly before the Civil War, fifteen thousand enslaved men and women worked on southern railroads. After the Civil War, African Americans continued to work on the railroads, both as convict laborers and as free agents.[iv]

Was Shumate’s skill as an “excellent manager of colored hands” obtained in one of these ways? Did he actually “treat them kindly” and leave them “anxious” to work with him again?

There was mixed feedback from men in a court case in which Shumate was involved. On January 16, 1882, Shumate and dozens of Muchakinock miners were interviewed in the case of John C. Cook vs. Marsena E. Cutts. Cook accused Cutts of winning his seat in Congress by means of illegal votes, due to the black miners coming from Virginia voting in the election when they were ineligible to do so. In 1867, three years before the Fifteenth Amendment to the U.S. Constitution ratified this right for the rest of the country, Iowa granted African American men the right to vote.[v] However, nonresidents were required to reside in Iowa for six months before being eligible to vote. The lawsuit sought to prove that the ex-Virginians had voted illegally, even insinuating that some had been paid to vote for Cutts.

With regards to Shumate, the bulk of the case transcripts dealt with Shumate’s character. Did the men trust him? Did he have a good reputation?

Some men were asked if he had paid them to vote. Of those interviewed, some said he was good to the men and trustworthy, while many others said they didn’t trust him or they’d had problems with him or that they’d heard bad things about him.

In his testimony, Isaac R. Eckart identified himself as an “Abraham Lincoln Republican, commonly termed by the so-called Republicans of today, a Greenback lunatic, and have the honor to act in my poor way as the editor of the Oskaloosa Messenger.” When asked if he had printed anything derogatory about Shumate, he replied that the only thing that he could remember that mentioned Shumate in the Messenger was the “whipping of a colored man in Muchakinock” and that he’d referred to Shumate as the “old negro [slave] driver of the South.”[vi]

Eckart’s description of Shumate gives the wording in the Valley Virginian article deeper meaning. For example, when referring to Shumate’s interaction with African American men, the article states Shumate “worked them” as opposed to “worked with them,” making one wonder if Shumate was indeed a “driver” before the Civil War.

Apparently, there was no follow-up questioning on the alleged whipping or Eckert’s name for Shumate, and no one else was asked or mentioned either one.

Of the other African American men who had negative experiences with Shumate, most issues concerned money owed to them but not paid. Page Irwin stated that he’d been promised twenty dollars per month but, when he got to Muchakinock, Shumate said he’d be paid fifty cents per ton. Irwin went to McNeill. McNeill said Shumate was supposed to bring back sixty men but had brought back more than there was work for and “not to blame him [McNeill],” adding that if the men were promised twenty dollars a month, then they would get it.

H.W. McNeill answered in favor of the miners in other instances as well. Once when Shumate and James Martin had an argument and Shumate fired him, Martin went to McNeill who, as mediator, tried to get the men to apologize to each other, adding that Shumate didn’t have the authority to fire anyone. Martin stated that he didn’t interact with Shumate much before adding, “He always treated me as a gentleman, and I him, after we made it up.”
_______________
[i] Staunton Vindicator, April 28, 1893, and Yost’s Weekly, May 4, 1893.
[ii] Valley Virginian, April 1, 1880.
[iii] “The Growth of Slavery and Southern Railroad Development” and “Railroad Companies and Directors Slaveholding Search”
[iv] Kornweibel, “Railroads in the African American Experience”, 11.
[v] Iowa’s Progressive History, Council Bluffs Community Alliance.
[vi] “Cook vs. Cutts Papers,” 490.

Edited excerpt from CREATING THE BLACK UTOPIA OF BUXTON, IOWA by Rachelle Chase.

In 1881, the McNeill’s sold Consolidation Coal Company to the Chicago & North Western Railroad for $500,000. Shortly thereafter, John Emory (J.E.) Buxton took over as superintendent of the company. Based on the Cook vs. Cutts transcript, J.E. discharged Shumate—the interviewer intimates that there was trouble between the two—and Shumate began recruiting African Americans for other coal camps nearby.

My research has left me wanting to know more about the recruitment efforts in Virginia, as well as more about Shumate. Hopefully, my trip to Staunton, Virginia in the early summer will result in more answers.