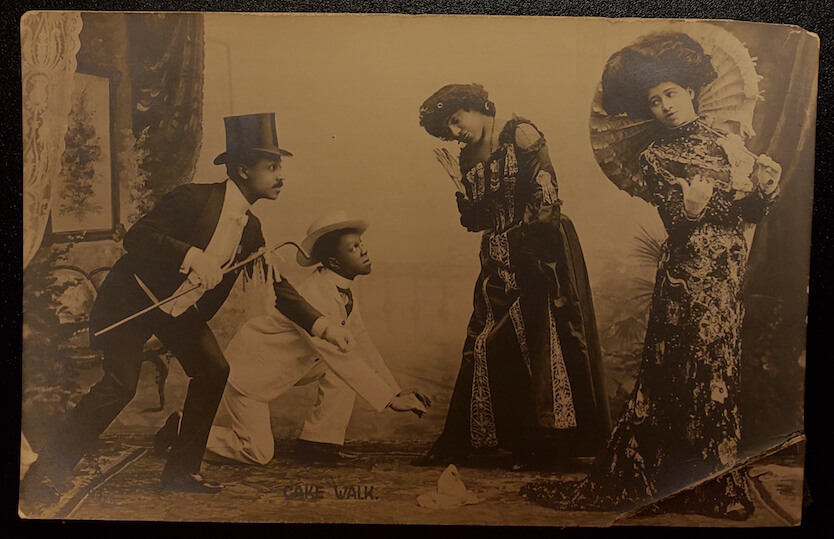 I recently became a deltiologist. This new obsession is thanks to John Taylor, who introduced me to the word, and to John Taylor and John Jacobs who have shared their knowledge, fun of postcard collecting, and fascinating postcards. Both are among those who have allowed me to include their rare Buxton images in my books. It is my envy of their collections that has started me on my path to collecting.

On Sunday, at the Phoenix Postcard Show, I bought my first item—an original photograph postcard titled “Cake Walk”—from Calico Duet Antiques. Despite its torn corner, an imperfection which John T. warned me would decrease its value, I had to have it.

Ben Buxton’s Two-Step and the History of the Cakewalk

I wanted this postcard because the image intrigued me and also because the cakewalk was in the forefront of my mind: I’d mentioned Ben Buxton’s Two-Step as a “Cake Walk” in CREATING THE BLACK UTOPIA OF BUXTON, IOWA. Below is an excerpt:

There are two ironies to note regarding the Buxton Two-Step poster produced for a musical composition created in honor of a man who created an integrated town that treated blacks equal to whites: (1) The “B” contains African American dancers, dressed in less formal and/or somewhat gaudy clothing, separate from the finely dressed white couples dancing on a dance floor; and (2) “Cake Walk” was added to further define the march.

The cakewalk, which originated from enslaved African Americans, had a racist connotation at this time. In AMERICA DANCING: FROM THE CAKEWALK TO THE MOONWALK, author Megan Pugh includes a statement from a formerly enslaved man in 1901. “Us slaves watched white folks’ parties where guests danced a minuet and then paraded in a grand march, with the ladies and gentlemen going in different ways and then meeting again, arm in arm, and marching down the center together. Then we’d do it, too, but we used to mock ’em, every step. Sometimes the white folks noticed it, but they seemed to like it; I guess they thought we couldn’t dance any better.” In minstrel shows popular at this time, white actors in blackface would then make fun of the black cakewalk dancers, portraying them as buffoons.

Excerpt from CREATING THE BLACK UTOPIA OF BUXTON, IOWA

So while I didn’t stumble upon a Buxton postcard, my purchase did trigger a Buxton connection. I’m happy with my first official purchase.

Check out the band version of Ben Buxton’s Two-Step.