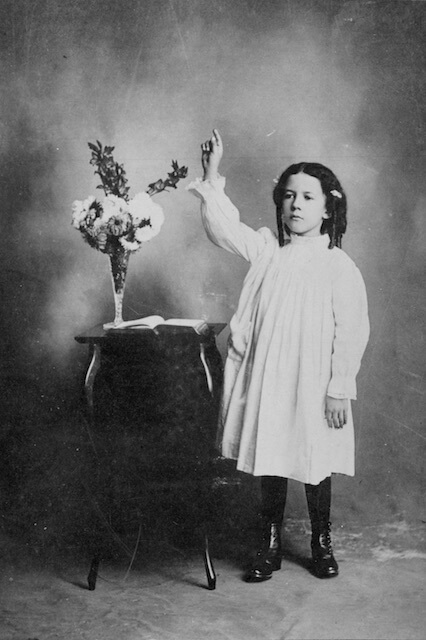 “At a revival we used to have, I remember this little boy was preaching,” said Gertrude Stokes, an African American resident of Buxton, Iowa. “He used to wear a little white robe. He ran our revival and that’s when I joined the church.”

The little boy was eight-year-old Lonnie Lawrence Dennis. On November 16, 1902, Lonnie appeared at St. John’s A.M.E. Church in Buxton. To a full house, he preached “The Life of Christ,” after which a long line formed at the altar. At least 50 men, women and children had decided to “follow the story of Christ.”1 Lonnie remained in Buxton for 10 days, where he continued to convert many, like Stokes.

During this time, locals trudged through mud to hear him. Others traveled from surrounding towns, such as Albia, Lovilia and Oskaloosa. Lonnie had become known nationwide and everyone wanted to hear the renowned child evangelist.

According to Lonnie, unlike other toddlers, he had no interest in playing. In his autobiography, which he’d completed by age eleven, he stated he’d place his dolls in chairs and preach to them. According to his mother, who traveled with him, at two years old he’d declared he must go out and preach. After repeated requests, she gave him his chance in Atlanta.2

By the time he was five, he was traveling and preaching throughout the U.S.

…in reply to the question whether he played with little children, he says:

“I do not like to play with little children. They are wicked and spiteful and mischievous.”
Then these follow:
“But didn’t Christ say, ‘Suffer little children to come unto me?’”
“He never played with ‘em.”
“How do you know that?”
“Because there is only one record of Christ’s childhood in the Bible, when he confounded the doctors in temple. Read St. Luke, chapter 2.”
“But you are too young to preach.”
“Christ was only 12 years old when all that heard him were astonished at his understanding and answers.”
“But no one will listen to you. You look like a little 3-year-old baby.”
“When they saw him they were amazed. He said unto them, ‘How is it that you sought me? Knowest ye not that I must be about my Father’s business?’”

Newspapers nationwide tracked Lonnie’s popularity and reported it with seeming wonder. In 1903, The Butte Daily Post reported 1,100 people showed up to hear him but 500 were turned away. The same year, The Minneapolis Journal claimed he had preached to more than 1,000,000 and converted “many thousands.”

His popularity extended beyond the United States. Seven months before he’d appeared in Buxton, he’d traveled extensively throughout Canada. Three years later, when he was eleven, he went to Europe for the first time. After three months of revivals in England, Scotland, and Wales, the July 7, 1905 Worthington Advance stated, “During the lad’s tour of Great Britain, he preached to probably 4,000,000 persons. His converts numbered 20,000.”

While the numbers reported may be an exaggeration, his popularity and effect on his congregation was not. Not only did he conduct his sermons with a maturity beyond his years, he composed and sang his own hymns and reputedly spoke several languages.3 Unable to believe his ecumenical prowess at such a young age, ministers—both black and white—quizzed Lonnie on his knowledge of scripture and pronounced him inspired. Physicians measured his brain and proclaimed he had an “abnormally developed brain, with a bias for religion.”4

A Shocking Change in Direction

As I continued searching for information about Lonnie Lawrence Dennis, I was expecting more of the same. But by 1912, newspaper article searches returned nearly zero results. After expanding my search beyond papers, I discovered that Lonnie now went by Lawrence Dennis.

But not only had he ditched his first name, he had apparently ditched his parents and all public references to being black. In 1913, he entered a prestigious prep school, Phillips Exeter Academy, and in 1915 he entered Harvard. After serving briefly in WWI in France, he resumed his studies at Harvard, graduated in 1920, and landed a job with the State Department.

But it was his activities beginning in the 1930s that shocked (and appalled) me—activities that made him “widely known as the most influential person in American fascism”.

How did that happen?

In the summary of Gerald Horne’s book, The Color of Fascism: Lawrence Dennis, Racial Passing, and the Rise of Right Wing Extremism in the United States, it states, “Gerald Horne links passing and fascism, the two main roles of Dennis’s life, suggesting that Dennis’s anger with the U.S. as a result of his upbringing in Jim Crow Georgia led him to alliances with the antagonists of the U.S. and that his personal isolation which resulted in his decision to pass dovetailed with his ultimate isolationism.”

I haven’t bought/read the book yet but it does sound interesting:

“What does it mean that Lawrence Dennis—arguably the “brains” behind U.S. fascism—was born black but spent his entire adult life passing for white? Born in Atlanta in 1893, Dennis began life as a highly touted African American child preacher, touring nationally and arousing audiences with his dark-skinned mother as his escort. However, at some point between leaving prep school and entering Harvard University, he chose to abandon his family and his former life as an African American in order to pass for white. Dennis went on to work for the State Department and on Wall Street, and ultimately became the public face of U.S. fascism, meeting with Mussolini and other fascist leaders in Europe. He underwent trial for sedition during World War II, almost landing in prison, and ultimately became a Cold War critic before dying in obscurity in 1977.

Excerpt of back cover copy of The Color of Fascism: Lawrence Dennis, Racial Passing, and the Rise of Right Wing Extremism in the United States