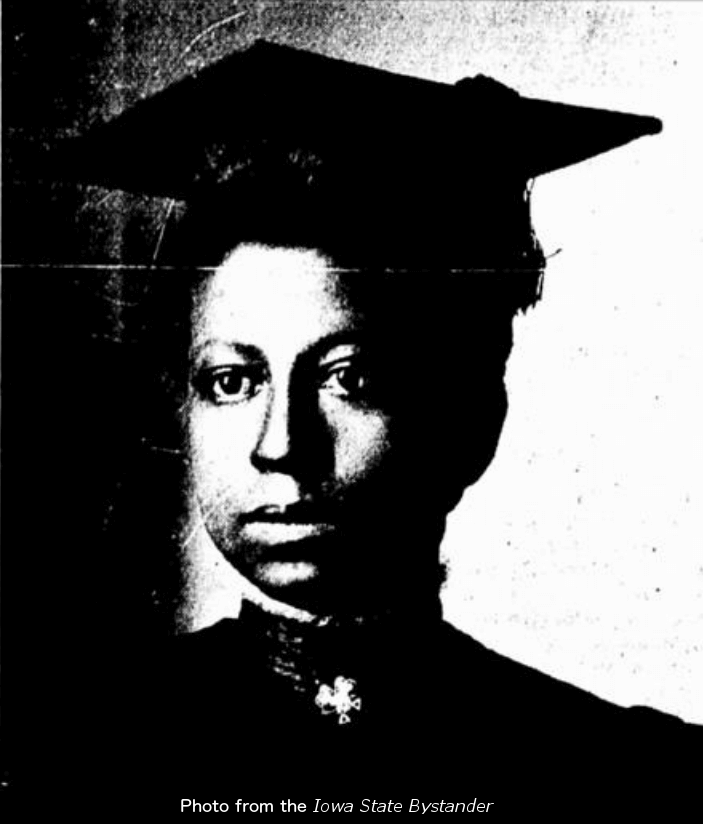 In 1907, The Iowa State Bystander announced that Hattie Hutchison was the first African American woman to obtain a pharmacy degree in Iowa. A large photo of Hutchison accompanied the article. But despite this announcement—and her accomplishment—the details of her life remain a mystery.

Hattie Hutchison was born in 1878 in Lancaster, MO. Sometime later her parents, Mr. and Mrs. Oscar Williams, moved with young Hattie to Ottumwa, IA. There the Williamses joined the community of affluent African Americans, for their names occasionally appeared in newspaper society columns for Ottumwa.

One example appeared in 1894 when the Bystander printed a detailed description of the “merry reception” they hosted to send S. J. Brown* and C. Williams off to school. According to the account, the event program included performances by an organist, soloists, and numerous speeches, after which the guests moved to the dining room where they “partook of the dainties of the season.” The festivities attracted out of town guests from Hedrick (16 miles**), Bloomfield (19 miles**), Peru (94 miles**), and Trenton, MO. (122 miles**)

In 1898, Hattie graduated from Ottumwa High School. Three years later, she married I. “Ike” Hutchison and moved to Buxton. Interestingly, while married to Ike, she enrolled in Highland Park College in Des Moines and graduated in 1907, becoming the first African American woman to obtain a pharmacy degree in Iowa. Remaining in Buxton, Iowa, she became the pharmacist of a drugstore “owned and operated” by Ike.

While working as a pharmacist, Hattie was active in Buxton’s social clubs. She served as assistant secretary of the women’s Self Culture Club and participated in the Federation of Colored Women’s Clubs. Interestingly, at the 8th Annual Meeting in Des Moines, IA on May 23, 1910, she presented a paper titled, “Taking a False View of Life”.

Within three years of her presentation and with little fanfare, Hattie died. On September 13, 1913, The Daily Times reported that police arrested Ike Hutchison for a “liquor nuisance” in Ottumwa. Almost as an afterthought, the article added, “while attending the funeral of his wife,” seemingly making Hattie’s death noteworthy only to supply Ike’s location at the time of arrest.

*S. Joe Brown also lived in Ottumwa. Along the way to becoming an attorney, he accomplished many firsts, from being the first African American to graduate from Ottumwa High School to one of the first African Americans to obtain a law degree from the State University of Iowa and more. Read an interesting summary of his life by Jack Lufkin, Lufkin, Jack. “Brown, Samuel Joe” The Biographical Dictionary of Iowa.

**Miles provided are included for illustrative purposes only. Mistakes can be blamed on my typing or Google Maps.